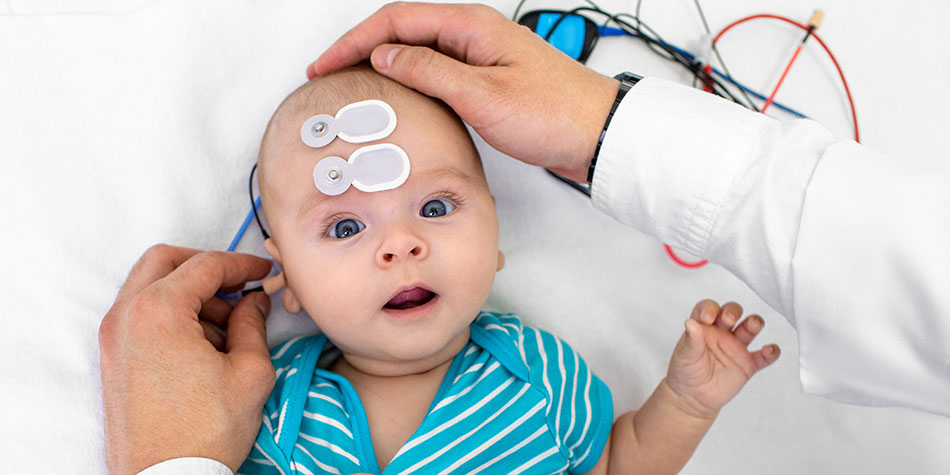 Before leaving the hospital, babies undergo many screenings and tests. One of these is a newborn hearing screening. It may seem early to test a baby’s ears but hearing loss is fairly common—occurring in two to three births per 1,000 according to the National Institutes of Health (NIH)—and warrants this initial screening test. Babies that are born at home or other non-hospital locations should also be seen within 1 month for newborn hearing screening.

“When it comes to hearing loss, early intervention is best,” says Dr. Ryan Mitchell, pediatric otolaryngologist at Rocky Mountain Hospital for Children in Denver. Babies have the most robust period of speech and language development in the first three years of life. Missing out on language exposure because of hearing loss can set your child behind in speech and language development, school performance, social development, and cognitive development. However, research found that kids who were diagnosed and treated by age six months typically had better language skills than those who were not treated and were on par developmentally with kids who had normal hearing.

Hearing screening is quick and painless

Newborn hearing screening is a quick, painless test that can even be done while your baby sleeps. There are two types of test: automated auditory brainstem response (AABR) and the otoacoustic emissions (OAE) test.

AABR uses electrodes placed on the baby’s head to measure the hearing nerves’ responses to clicks or tones played through soft earphones. The OAE test places a small probe just inside the ear canal to measure sound waves. Clicks or tones are played into the ears, and the probe measures response.

What you can expect after screening

In most cases, your baby will pass the test. However, if your baby doesn’t pass the screening test it does not mean they definitely have hearing loss. A second screening test should be performed. If your baby does not pass the second test, they should be seen by a pediatric audiologist for more extensive testing. Because of the importance of early intervention, Dr. Mitchell recommends that you have follow-up diagnostic testing performed before three months of age, but earlier is better.

Dr. Mitchell says, “If your child has hearing loss, you may see a range of specialists including an audiologist or a pediatric ear, nose and throat (ENT) doctor. These specialists help determine the degree of hearing loss and the best path forward to help your child reach their best language, communication and cognitive potential. Intervention may include the use of technology, including hearing aids, cochlear implants and other assistive devices, or access to a sign language, or both.”

We’re here for you

At Rocky Mountain Hospital for Children, our ENT and audiology providers offer the full spectrum of testing, hearing aids as well as medical and surgical interventions for hearing loss.

For more information or to schedule an appointment with Dr. Mitchell or one of our audiologists, call (303) 301-9019 or visit our website.

May 31, 2022
A scoliosis diagnosis in children may sound scary, but advancements in treatment have made it much less so.
Previous Post

May 1, 2022 by Anat Geva, PhD - HealthONE Behavioral Health and Wellness Center
Grieving children face unique challenges. The adults in a child's life can help facilitate the child's ability to regulate amidst the storm.
Next Post
Back to blog home

What Many Don't Know About Autism

Facts from the fun fairies: 'Play is serious business!'