Pregnancy was nothing new for the Santala family. After giving birth to eight kids, many might say that Paula and Marc have become experts when it comes to the world of babies.

“We found out we were pregnant again last December, my eighth pregnancy. Our first appointment was in January, that’s when we found out there were two. We had already had twins so we knew that was a possibility, but it was just as shocking to see two on the ultrasound again as it was the first time,” Paula says.

That’s right—twins again. A decade after their first set of fraternal twins, Paula and Marc were getting ready for their second set and these two were identical. The pregnancy was going smoothly until a 25-week checkup led to a series of events that would put the strength of the Santala family and their unborn twins through the ultimate test. 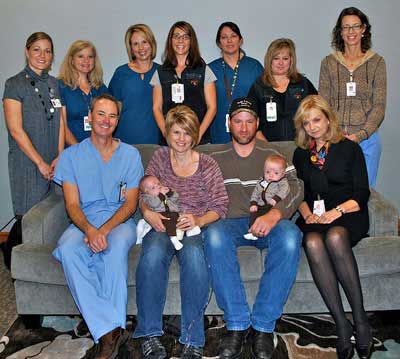 “I’ve delivered many of Paula’s babies including her first set of twins 10 years ago so when she came into the office that day it was clear something was different,” says David Forschner, MD, and an OB/GYN at The HealthONE Center at P/SL.

“The twins shared a placenta so there was concern throughout the pregnancy that one twin could actually steal blood from the other twin, causing one to get too much blood and the other not to get enough, effecting blood oxygen and nutrition. The outcome won’t be good for either twin,” Dr. Forschner says.

Based on the ultra sound, Dr. Forschner suspected the babies’ had developed this condition, known as Twin to Twin Transfusion Syndrome, and immediately called Bronwen Kahn, MD, a high risk perinatologist at The HealthONE Center for Maternal Fetal Health to confirm the diagnosis.

“We confirmed Dr. Forschner’s findings and knew we didn’t have time to waste. We needed to get Paula to Seattle immediately for a laser ablation surgery, a rare surgery that has to be done in utero,” Dr. Kahn says.

In the meantime, Marc, who was two hours away in the family’s hometown of Flagler, CO, received a call no father wants to get.

“They were giving them a 90 percent mortality rate. It was a pretty big shock. Everything went from being normal to neither of my babies doing very well. It was pretty heart wrenching to hear,” Marc says.

“I was freaking out and I was scared, but at the same time I was just able to deal with it and go with it. I had to. It was the only chance we had to save these little guys, but it still didn’t feel like it was happening to us,” Paula says. 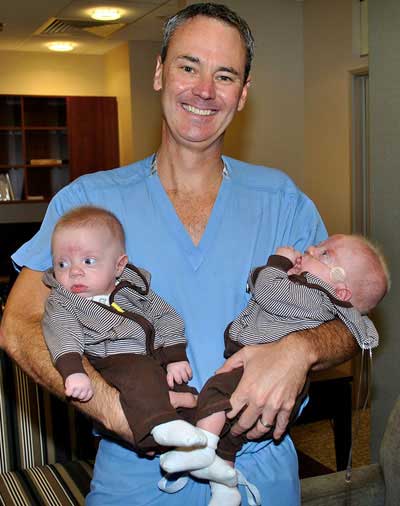 Back at the hospital, Megan Lee, the Patient Care Coordinator at The Center for Maternal Fetal Health and a former Labor and Delivery nurse, was trying to help take pressure off of the family.

“You have enough emotional stress so we take care of the logistics and get you the experts that you need. The Santalas and I met on a very intense day, but we were able to get them to Seattle that night, get the surgery scheduled the next morning and have them back in Denver a couple days later,” Lee says.

The surgery was a success and both twins were showing positive improvements before Paula left Seattle. But on the plane ride back to Denver Paula began noticing something wasn’t quite right.

“I started having headaches that just wouldn’t go away so the doctors had me come back into the hospital to do some blood work before we drove all the way back to Flagler. We didn’t get to go back home then,” Paula says.

The family was dealt yet another blow. Working together, Dr. Kahn and Dr. Forschner diagnosed Paula with HELLP Syndrome (more commonly called Mirror Syndrome) in which the babies’ complications manifest in the mother physically putting all their lives at risk. During Mirror Syndrome, the mother typically has a breakdown of red blood cells, she has elevated liver enzymes, and a low platelet count.

“At that point, we couldn’t wait to deliver them. Paula was too sick. So, I saw her around 4:30 p.m. that day and by 7:30 that night we were performing an emergency C-section,” Dr. Kahn says.

That night, two very tiny babies came into the world — Jeremee at two pounds and one half ounces, and Kacee weighing two pounds, 12 ounces.

Paula was placed on magnesium and steroids, but was able to go home four days later. The babies went into the Neonatal Intensive Care Unit (NICU) at Rocky Mountain Hospital for Children, a hospital they’d call home for about the next few months.

While Kacee was doing pretty well, Jeremee required extra care since he was the baby that had been cut off from the blood in the placenta. Dr. Steven Leonard, a pediatric cardiothoracic surgeon at The Center for Maternal Fetal Health was called in about a month later to perform a PDA ligation heart surgery, something very common in preemies.

“That’s actually a blood vessel in every infant before it’s born that normally closes on its own, but in a lot of premature babies it remains open and causes excess blood flow through the lungs. That was the case with Jeremee so we just had to go in there and close it for him,” Dr. Leonard says.

Growing in the NICU

Then, it was finally time for Jeremee and Kacee to recover and fully develop in the NICU. Registered nurses Heather Despard and Cynthia Bonieracine became very close with the twins and the Santala family.

“We’re their little advocates. They’re not going to be the typical patient saying we need this or we feel this, so we have to do what’s right for them,” Cynthia says. 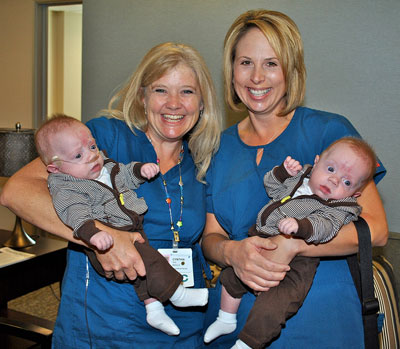 “It’s truly an honor and a pleasure to be this part of somebody’s life. They’re so grateful what you do for them, but really what they do for you, it feeds your soul,” Heather adds.

Finally, after a whirlwind of events and complications, on August 10 Kacee was able to go home followed by Jeremee on September 15.

The Santala family says that, while the road has been long, they wouldn’t have trusted any other team with their two newest additions.

“We trust everyone here and we’ve known them for years and come to trust them. Thanks to the expertise and caring of all the staff starting with Megan Lee, they got us through it and we’re getting through it,” Marc says.

Both Kacee and Jeremee still have quite the road ahead, but they’re recovering nicely and even recently had a chance to stop by to visit the physicians and staff at The HealthONE Center for Maternal Fetal Health who were instrumental in saving their lives.

“This is a wonderful family and they’re very supportive. They have everything now from high school kids to two newborns, but I think they’re going to be just fine and it’s great to see they’re doing so well,” Dr. Forschner says.