It didn’t bother him every day, but after a particularly active day Sylvester would often complain of leg pain to his dad. The pain was hard to pinpoint so both Sylvester and his father tended to minimize the problem.  Rest almost always made it better.  And because Sylvester was slightly overweight, he was quite willing to lie on the couch and play video games while his leg was recuperating.  The frequency of his leg pain began to increase and so the father/son team presented to the pediatric orthopedic clinic at Rocky Mountain Hospital for Children. There the physical exam and x-rays confirmed that Sylvester had a slipped capital femoral epiphysis in its very early stages. He was scheduled in the operating room for a simple screw fixation that same day.

What is Slipped Capital Femoral Epiphysis (SCFE pronounced like "skiffee")?

To understand SCFE, you first have to know a little about the hip joint. The hip is a ball-and-socket 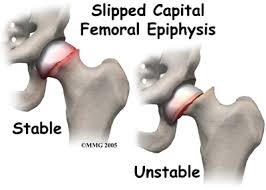 joint. The ball is at the top end of the thighbone (femur) and the socket is in the pelvis.  Ball-and-socket joints offer the greatest range of movement of all types of joints, which explains why we can move our legs forward, backward, and all around.

In kids and teens who are still growing, there is a growth plate (physis) at the base of the ball (femoral head). This growth plate is made of cartilage which is softer than bone. The growth of the top part of the thighbone depends on this physis.

When a child has SCFE, the femoral head of the thighbone slips at the physis, almost the way a scoop of ice cream might slip off a cone. Sometimes this happens suddenly — after a fall or sports injury, for example — but often it’s a slow process with vague pain that is easily dismissed.

Usually, SCFE is classified as:

Stable SCFE. This is referred to as a "mild slip," which causes a child to experience some stiffness or pain in the knee or groin area, and possibly to develop a limp. The pain and the limp usually tend to come and go, worsening with activity and getting better with rest. With stable SCFE, your child is still able to walk although crutches may be necessary.

Unstable SCFE. This is a more severe slip that is usually much more painful. Your child will not be able to bear weight on the affected side, and range of motion tends to be severely limited. An unstable SCFE is also more serious because it can restrict blood flow to the hip joint, leading to a condition called avascular necrosis of the femoral head.

No one knows for sure what causes SCFE. However, it is known that it mostly occurs in kids between 11 and 16 years old who are going through a growth spurt. It's more common in boys, though girls can be affected too. It's also more likely to happen in kids who have the following risk factors, all of which can have an effect on bone health:

In terms of musculoskeletal conditions, SCFE is one of the more common with an incidence of 10 per 100,000.  Although many cases of SCFE affect only one hip, up to 40% are bilateral (affecting both hips).