Intruder in the night

For many children, monsters in the closet aren’t the only thing keeping them awake

Tamicka Reno knows what it’s like to sleep in fear. Ever since the night a horrendous crash sent the single mom fleeing across her house toward her 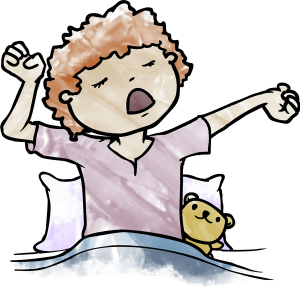 young son’s room, sleep has been elusive in the Reno home. What she found —a dazed 10-year-old boy standing next to a fallen 6-foot bookshelf, its once-packed contents spewed across his bedroom floor — resulted in even more efforts to protect her son.

“You always have that extra ear,” says Reno, whose son, now 12, sleep walks. “The way he was standing, and where his toy box was, kept it from falling on him,” Reno says. But what if things were different? “What if he’d had friends staying over and sleeping on the floor? Or what if one of our dogs had been laying there?”

Although her son’s sleep problem was loudly apparent, and he’d actually been being treated for sleep walking and other sleep disorders before the incident, many children today are suffering from undiagnosed or misdiagnosed sleep problems. Because of the potential effects on their lives, sleep experts are sounding the alarm.

Although studies in children are fewer, sleep disorders can lead to a host of health problems in adults, including heart disease, diabetes, obesity, lowered immunity, memory deficits and psychological issues. “The logical assumption is that these issues can be affecting kids, too,” says Dr. Ramon Cuevas, Reno’s doctor and a sleep specialist with Rocky Mountain Hospital for Children.

In fact, studies show that even a relatively small amount of sleep deprivation routinely in children can have detrimental effects. “One study looked at 1,500 children and followed them yearly from 5 months to 6 years of age,” Bolt says. “Kids that slept roughly one hour less had increased hyperactivity and lower skills on tests measuring verbal and nonverbal cognitive ability.”

And, as social changes continue sabotaging youths’ sleep today, such as high athletic and academic pressures, early school-start times and an increased use of electronics, the studies are particularly concerning, Cuevas says. “I’ve seen all of those affecting sleep more and more.”

With the host of problems that can disrupt sleep, and the potential for misdiagnosis, seeing a sleep specialist is critical, Cuevas says. ”Because they often present with neuro-behavioral problems, such as hyperactivity, irritability and mood issues, some kids might be misdiagnosed with ADHD or bipolar disorder when, in fact, they might be having an underlying sleep problem.”

Sleep experts have access to the latest diagnostic and treatment methods, offering comprehensive sleep evaluations that look at the whole child, including physical, psychiatric and social histories. “And we involve the whole family,” Cuevas says. Parents should have any sign of sleep trouble, such as waking up tired or falling asleep during the day, in a child evaluated, he says. Reno, whose son has fallen asleep in class, has even gotten teachers involved in his treatment.

“It’s really hard,” Reno says, adding that her 17-year-old daughter has sleep troubles, too, partly because she’s always on the alert for her brother. “You don’t know what to expect from night to night. I’ve literally had to baby-proof everything,” storing kitchen knives out of reach, double securing doors to the outside. “He even has a bell on his bedroom door.” Her best advice to other parents dealing with child sleep issues is to seek expert guidance. “And just be patient. It takes a lot of time.”

Sleep disorders can rob kids (and parents) of sleep