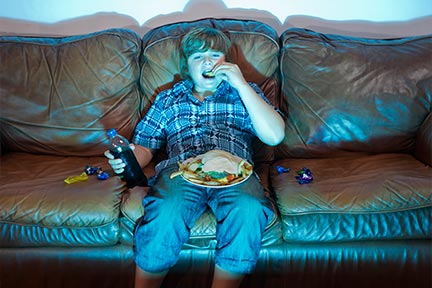 In the U.S., one in five children between the ages of 6 to 19 have a body mass index (BMI) at or above the 95th percentile, which is considered obese. Many adults in the U.S. are also obese, which could contribute to a child developing unhealthy eating habits or not getting enough physical activity.

Obesity in children is a serious health concern, as obesity has been linked to an increased risk of diabetes, hypertension, high cholesterol, asthma and sleep apnea.

Sometimes, parents might not be aware of the unhealthy eating habits they are passing along to their children. If your child is overweight or obese, getting their weight under control is essential to their long-term health and wellness. Here are some of the biggest mealtime mistakes families often make when it comes to eating healthy — and how to change these habits:

However, pressuring kids to clean their plate might encourage them to eat past the point of fullness, which could lead to weight gain. Additionally, telling children that they can have dessert once they clean their plates could also lead to them consuming more calories than they need.

Instead of having a “clean plate” rule in your house, ask your child if they feel satisfied. Encourage them to eat until they feel full, but don’t be demanding or raise your voice if they don’t eat everything on their plate.

Mistake #2:  Not eating enough vegetables
At every meal, half of your kid’s plate should be filled with vegetables and some fruits. According to the Centers for Disease Control and Prevention (CDC), a shocking 9 in 10 children in the U.S. don’t eat enough vegetables.

Kids don’t always love their veggies, but one way to encourage them to eat more is to offer at least two types of vegetables on their plate. It might take a kid up to 15 tries to decide if they like a vegetable or not. It also depends on how the vegetable is prepared. There are many recipes available online or in a cookbook that can give parents more creative ways to incorporate vegetables into their diet.

During dinnertime, families should practice mindful eating, which includes noticing the colors, smells, textures and flavors of each food. Also known as “intuitive eating,” paying attention while you’re eating can prevent eating too much or eating past the point of fullness, which reduces one’s chance of gaining weight. For families, eating meals at the dinner table also encourages bonding and spending more quality time together.

For example, a cup of broccoli contains about 31 calories, but using two tablespoons of olive oil when roasting or sauteing adds another 240 calories. Adding things like oil, salt, butter or cheese to veggie-based meals can quickly turn a healthy dinner option into a high-calorie one for the whole family. When cooking, be mindful of these additions and swap them out for a healthier alternative, like using low-sodium broth in place of oil, which has only 14 calories per cup.

Mistake #5:  Letting your kids eat junk food too often
It’s no surprise that most kids love junk food, whether it be sugary sweets, chips, sodas or burgers and fries from fast-food joints. For parents with kids who are “picky” eaters, it can be hard not to give in to their requests for junk food from time to time.

As a parent, it’s also challenging to find the time to cook healthy meals and prepare low-calorie foods for your kids. However, accommodating your child’s unhealthy food requests can lead to weight gain and poor eating habits. While it’s fine to let your kid have an unhealthy snack or treat from time to time, don’t stock your cupboard with these items or make them a part of your daily diet.

Mistake #6: Being too restrictive or depriving children who are overweight
If your child is gaining weight or already overweight, it might seem like the best thing for parents to do is restrict all sweets and junk food. However, being too controlling of your child’s diet can have the opposite effect, leading your child to rebel by binge eating on junk food in secret or eating junk food outside the home when their parents aren’t around.

One small study published in 2014 revealed that restricting a child’s intake of certain foods, especially ones they find tasty, can increase their desire and consumption of that food. So, if you don’t let your child ever have a sweet treat or salty snack, this may make them want the forbidden food even more.

Even if your child does need to lose weight, follow a healthy diet in moderation. Having an occasional treat shouldn’t derail an entire healthy eating plan and allows children to still enjoy their favorite foods from time to time — just not every day.

Some families follow a 90/10 or 80/20 rule, in that they eat a diet that’s 80-90 percent healthy, but still let themselves indulge their cravings about 10-20 percent of the time. Remember, your kids are still kids, so it’s okay to let them eat ice cream on a hot day or eat french fries every now and then.

Symptoms in Newborns You Need to Know

October 24, 2018
When you are a new parent you learn there is a delicate balance. On one hand you don't want to overlook something in your newborn that could ...
Previous Post

The Truth About Tourette Syndrome: Understanding...

October 8, 2018
While Tourette syndrome is not common, it does affect a small number of boys and girls. According to the Centers for Disease Control and Prevention...
Next Post
Back to blog home

The Truth About Tourette Syndrome: Understanding This Perplexing Disorder

Clinic makes it easy to get a second opinion